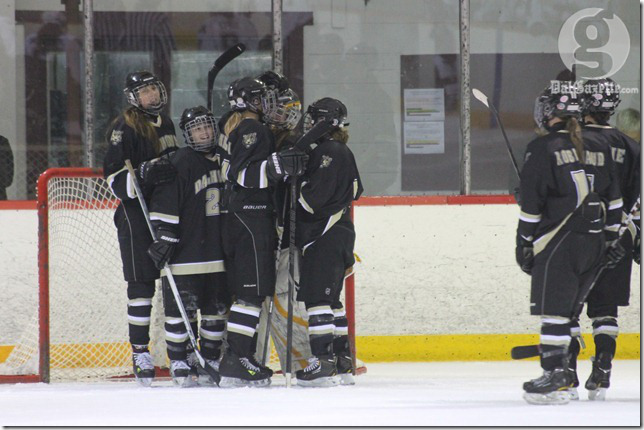 It’s sometimes easy to forget that some of these athletes are only 18. (Richard Lafortune photo)

In the media circus surrounding the suspension of the Dalhousie women’s hockey team too many pundits have forgotten one crucial thing: this is not a professional or adult team. It is a team of capable but young university students.

There’s a contradiction in being a university student: am I a strong, independent adult? Or a young, growing student? Seeing an AUS rookie dangle past a defender and score high glove can make it easy to forget the kid who just did that is 18.

No one really knows exactly what the Dal hazing involved. Dal spokesperson Charles Crosby says it was “humiliation, intimidation, personal disrespect—it was bullying.” AUS broadcaster Jon Pickett says it was “Tom Cruise in Risky Business crossed with Heath Ledger as the Joker.” From what the senior players say, it was a run-of-the-mill trial most adults would brush off. But the rookies aren’t adults.

In a team filled with 21 and 22-year-old players, the rookies are junior high kids all over again, susceptible to both peer pressure and bad judgement. That they agreed to hazing is only natural. It’s natural to trust older peers.

The social demand to blend into a high-performing team before the puck drops makes it hard for rookies to say “no” to hazing plans. The subjective severity of the hazing isn’t the problem, it’s the pressure put on anyone to do it in the first place, despite what accommodations or good intentions follow.

The captains forgot that the rookies are 18-year-olds, alone for the first time in Halifax, balancing fiendish coursework and gruelling practices. The ordinary first-year can’t figure out where Dartmouth is, let alone try to fit into a new social group while trying to pass an intro English course at the same time.

First year should be a mix of the unknown and of growth: personally, academically, socially. It’s unfair to expect every 18-year-old to have the emotional self-confidence to tolerate hazing, or her teammates’ silent scorn if she refuses.

No matter how strong and independent a young student wants to be, he or she is still vulnerable to bullying, at least until learning that most upper-years just muddle through, too, making mistakes—sometimes very public ones—as they go. It’s time for the older players to stop trying to spin this story to their advantage and accept they not only did wrong, but deserve the consequences.

Why? Because one player was hurt enough to speak up. That she felt strongly enough to do that should be scary enough for the older players to admit, unconditionally, that the party was a bad idea.

Seniority means that apologies no longer make everything better again. It means investigations aren’t easy. University graduates should know that mistakes carry penalties. Hopefully the captains and the other players who have played their last game know that now.

Dal has been criticized for being secretive about what really happened. In truth, they likely can’t say much, because to do so would leave the one first-year who complained without the only friends she may have in Halifax, subject to a media whorl, and estranged from the reason she came to Dal at all: to play hockey.

Let’s not forget as this story grows that there is both a person and a player at its heart. Every athlete on every team bears responsibility for this precisely because Tigers athletes represent their school so well.

By forgetting that their teammates have fears all their own, the older women’s hockey players deserve to lose the right to wear their jackets. They failed their school and their fellow scholars and for that they no longer really have a team, whether they have games to play or not.

Dylan Matthias is a former editor-in-chief (2011-12) and sports editor (2010-11) at TheDalhousie Gazette. It took him until his second year of university to work up the courage to attend a Gazette contributor’s meeting.