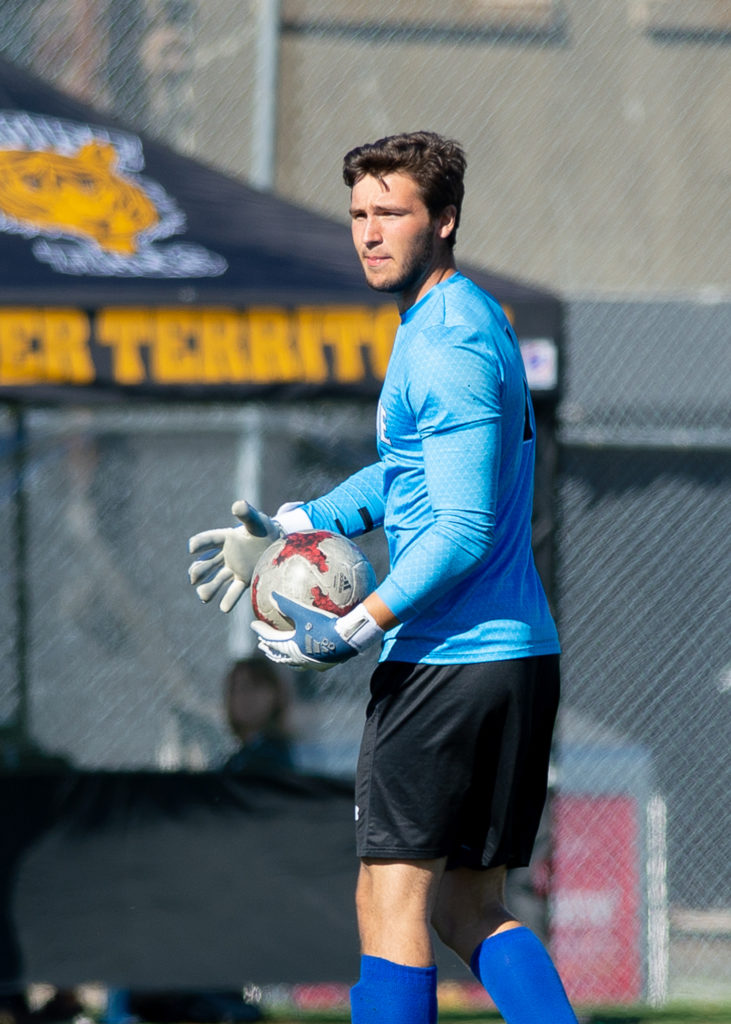 The Dalhousie University Tigers men’s soccer team has been scored on only six times in 11 games this regular season. One of the main reasons for their success has been the team’s new starting goalkeeper, Grondin.

Grondin’s strong play, combined with a deep defensive line, has allowed the Tigers to go 7-2-2 in the regular season and clinch a playoff position after failing to qualify last year.

As a backup keeper to TJ Leopold in the 2017-2018 season, Grondin, played in four games as a rookie.

Taking over the starting position this year, expectations were high, says Nearing.

Grondin leads the league in save percentage at 0.905 and has made 13 more saves than any other keeper.

Grondin says that he’s not doing anything different this year, he just continues to train consistently.

Nearing has noticed a difference in Grondin’s confidence level.

“One of the biggest changes is his confidence has really shone a light onto the field,” says Nearing. “He’s very vocal, he controls the back line and he’s a great leader from that goalkeeper position.”

“I’m a lot more confident with my feet this year,” says Grondin. “Maybe it’s just having one year of experience under my belt, but I’m able to play a lot more out in the back and help our team keep the ball a lot better.”

Having that reliability in the net has been huge for the Tigers, as they went the first eight games of the season without getting scored on.

“That was awesome,” says Grondin. “Our team really bonded well over that and having a united front about not letting any goals in really built our confidence up and created a really great team bond in the back line.”

In addition to Grondin, the rest of the back line has been essential in Dal’s defensive effort.

The back line includes the return of Isaiah McCullough at the centre back position, who last played for the Tigers two years ago. Now in his fourth year of eligibility, his strength, speed and great passing range make him valuable for the Tigers, says Nearing.

It’s a combination with a lot of depth, but, “it’s certainly Isaiah and Ben [who] have been the anchors of that group,” says Nearing.

“You never think that you’re never going to get scored on,” says Grondin. “But you’re just gelling a bit more with your teammates and it’s always good to be confident.”

After eight games without a goal against, the Tigers lost 2-0 to the first place, undefeated Cape Breton University and then lost 4-0 against Acadia University.

“It was a bit tough. When you go those eight games without [getting scored on] the downside is when you do get scored on sometimes when it rains it pours,” Grondin says.

In a season of only 12 regular season games, it was important for the Tigers to stop the downpour quickly, so to speak.

Putting those losses behind him, Grondin and the team bounced back and got another shutout – Grondin’s eighth of the year, the most of any keeper in the AUS – in a 2-0 win against the University of Prince Edward Island on Oct 21st.

But the team isn’t focusing on the shutout streak or past games anymore. At the time of writing, they have one game left in the regular season. They’re focused on the playoffs that start Nov.1st in Sydney, N.S.

“We’re anxious to get back into the playoffs,” says Nearing. “We really hope that somewhere along the line we beat Cape Breton because we’d really like a rematch with them.”