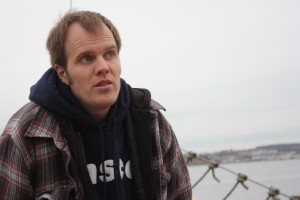 Dave Gunning certainly isn’t an imposing figure. Sitting down with him at a local Irish pub, one might think he’s too shy to raise his voice in song. At first glance, the earnest face that doesn’t quite make eye contact doesn’t seem to be the performer you might expect on stage, least of all with a symphony backing him up. But despite that first impression, that’s what his next gig is at the Rebecca Cohn.

“I’ve done the symphony thing once before, with George Canyon in Edmonton, but I’ve never played with Symphony Nova Scotia,” Gunning says of his Friday lineup involving the province’s finest classical musicians. The show, Men of Song combines the folk singers with a full orchestra filling out the sound.

It was with George Canyon, another Pictou-grown showman, that Gunning got the chance to go to Afghanistan recently for a Remembrance tour–a stark contrast to his symphony pairing. The trip to a war-torn country is something he’s still trying to digest. “It’s going to take me a while to figure it all out I think.” Gunning’s look gets distant as he describes the conflict in his mind between his non-violent ideals and the personal connection he made with people trying to help overseas. “I’ve always been an anti-war guy, but I understand why we’re there. They say if you adopt a child who has been abused before age three, that stays with them their whole life. Imagine a whole country of that.”

For Remembrance Day ceremonies, Gunning was one of a convoy of 40 that flew to Afghanistan: injured soldiers, politicians, entertainers and security personnel. “There was only so much they could do for our safety; that became pretty evident when we got there. Scary, but a great experience. This sounds overused, but we’re so fuckin’ lucky here.”

His conversation is peppered with observations about the locals, and how Afghan school attendance is on the rise. “If you have your grade one there, that’s a big deal. Some people carry pencils in their front pocket as a status symbol, even if they can’t write.”

A quick walk along the waterfront to clear the air gets Dave talking about his plans. “I’ve got a new Christmas album coming out very soon, and I’m going to Toronto. That’s because I’m nominated for four Canadian Folk Music Awards.”

The nominations, all for his latest tribute album, came as a surprise to him. “The John Allen Cameron tribute was just a side project, but it’s been really well received.”

As if on cue, a fan walks up to shake Dave’s hand. Tim Gregan is a fan, as well as a Dal grad, and he’s full of questions about the latest album–the gear he used to match John Allen’s sound, the kind of picks he used and his amp settings. Tim was suddenly the interviewer, with a flurry of questions, including the why and how of the album. “I thought a few people in Atlantic Canada would get a kick out it. I produced the album myself, and that was a lot on my shoulders. I’m just glad it’s doing so well.”

Dave noted that he’s always planning ahead. “I’m always writing for the next album, or touring the current one. If you don’t keep everything up it all falls apart.” After a visit to Tim’s boat, Gunning hops in the van. He’s off to a house party, armed with a few new stories. “Things sure are keeping interesting, that’s for sure.”

Dave Gunning will be joined by Symphony Nova Scotia, Kim Dunn and Thom Swift at the Rebecca Cohn Nov. 25 at 7:30 p.m.