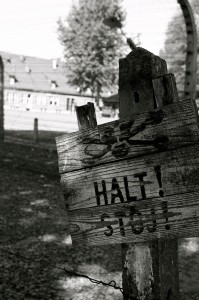 When to stop -- photo by Laura Hubbard

A student’s journey through the Holocaust

“I’ve never been fully affected hearing that six-million were murdered during the Holocaust. I can’t relate to that number. I’ve never seen six-million of something. But seeing 20,000 pairs of shoes in one of the barracks made it real.”

This past May, 60 Canadian students traveled to Germany and Poland on the March of Remembrance and Hope, a Holocaust case study program that works to embrace diversity and eliminate genocides and hatred through the Canadian Centre for Diversity.

Laura Hubbard, a third-year student of the University of King’s College, was chosen to take part in the March in May, one of two participants from the Maritimes who attended.

Laura writes her thoughts and experiences in her blog, chronicling her journey through some of the most infamous destinations in history.

Two survivors, Pinchas Gutter of Majdanek Extermination Camp, and Faigie Libman, a survivor of Birkenau, travel with the group, sharing their stories and experiences, inspiring others to stand up for Holocaust education and human rights, and continue to do so when the survivors are gone.

“I can’t say I’ve been to hell,” she writes in one entry. “Not in comparison to the stories we heard while overseas and the stories and facts we all know about the Holocaust. It’s not fair to compare my suffering now, as I deal with society and humanity, to the suffering then. It’s minimal in comparison.”

“But I can say I survived Auschwitz. I survived Majdanek. And that’s rare. It’s fantastic that I could visit these places and have the opportunity to witness the sites and atrocities to further educate and prevent genocide. But it is hell, and I was there. I witnessed it, too.”

While in Europe, students traveled within Berlin and throughout Poland, visiting sites such as the Wannsee Villa, where the Final Solution was planned, Auschwitz, Treblinka, the village of Tykocin, and many memorials, including the Umschlagplatz in Warsaw, and Babelplatz— the site of the book burnings in Berlin.

She describes the trip as “fantastic, but emotional and exhausting.”

Hubbard has reflected since coming home, and continued to write about it. A few weeks after her trip, she blogged about this reflection process. “I’m carrying on daily life as if normal, with my thoughts running through my mind. I’ve yet to openly talk about my experiences, my thoughts, my struggles.”

“Majdanek was hell on Earth and it still is, today. For the most part, Majdanek is as Majdanek was. And that made things real. That gave me goosebumps. And that really showed the hell. The reality of it made Pinchas’ story come to life and haunt me. It is this place that is the epitome of evil and fear and horror in my mind. And it is this place that is in my mind so often during the night as I dream.”

During a trip to Majdanek, Hubbard walked past 20,000 pairs of shoes, taken from those entering the death camp by Nazi guards. She writes, “I can’t relate to a number. I’ve never seen six-million of something.”

But when she saw 20,000 pairs of shoes the numbers began to sink in. “I could physically see the number. I couldn’t believe the amount. And the smell of the hot leather, the stale air in the barracks. This was powerful.”

Students visited Majdanek on day five of their trip. Majdanek was the site where survivor Pinchas Gutter was sent for the majority of his childhood in the Second World War, making the visit back even more meaningful for Hubbard, as he shared his story, and remembered walking the same paths.

It wasn’t until Hubbard was flying over Majdanek on the way home that she was able to write a journal entry about the visit. Her blog post the day of the visit was brief:

“This [memorial at Majdanek] was so powerful and emotional for me: we all truly shared a connection—the same cause. We were not only honoring those whose ashes were in front of us, but those who were brave, strong, and hopeful. The past, present, and the future.”

Laura’s blog can be found at www.pilgrimagetopoland.blogspot.com. It charts her journey overseas and deals with the emotional and educational aftermath and reflection process.