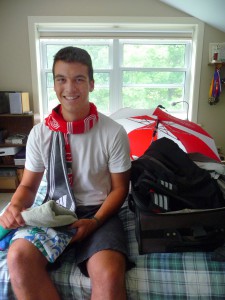 It is well known that Dalhousie attracts more than just Maritimers. According to the school’s website, 44 per cent of its students come from other provinces. But in the thrill of a transition, what gets lost in translation?

Alex Martin, who graduated from high school in Kingston, Ontario, will begin studying commerce at Dal this fall. He says that when he began looking at university options, the University of Waterloo and Dal were among his top choices.

“Dal became my first choice as I learned about the program,” says Martin. He was attracted to its smaller class sizes and the co-op program, which can be completed in four years.

But the thrill of the Maritimes was a big part of his decision. Martin says he has never actually visited Halifax, but has been to Prince Edward Island, and was wowed by the atmosphere of the east coast.

Although both city and school are appealing, it’s still far away for students who call Ontario home. “Taking that step to the east coast is going to be a little nerve-racking,” Martin says, “I’ll be at least 16 hours away from home.”

For some, the move isn’t worth it. Former Tiger Maddy Tetreault took her first semester of university at Dal, and then chose to move back home. “I was constantly seeing pictures on Facebook of my high school friends going home, and I missed it,” she says.

Matthew Roby is attending Dal for his third year of university as a visiting student from Queen’s University in Ontario. Just as with Martin, Dal’s programs played a large part in bringing him to Dal. Roby will take medieval English classes to complement other courses from Queen’s toward his concurrent education degree.

He says this year Queen’s has reduced its course selection because of professors’ sabbatical and retirement schedules. So Roby began exploring programs at McGill University and the University of Toronto.

Roby, who has visited Halifax before, agrees. “I’m originally from England,” he says, “and I like the Halifax lifestyle. There’s quite a pleasant pub culture.”

Dal’s orientation week is one tool that aims to ease the transition of living far from home. The activities force new students to meet their peers, learn more about the campus and more about Halifax.

Throughout the year there are plenty of options available such as clubs and societies. For those feeling homesick, Dal Counselling Services offers support and advice.

Of course, it isn’t just about the student’s transition; families may worry too. “I’m not worried but I worry my mom will worry,” says Roby. “But now that I’m in third year, I guess she’ll just have to get over it.”